The previous posts tell the story of Edmund Cahill’s sister, Bridget Reeves, and his mother Julia Cahill as well as some of his own migration story.

When Edmund arrived in Victoria he stated his occupation as “shoemaker”. I found an 1874 article in the Gippsland Times which suggests he maintained that occupation for quite some time. Although Edmund settled initially in Stratford where sister Bridget and her husband were living, he later moved to Briagolong, a town 15kms north of Stratford. 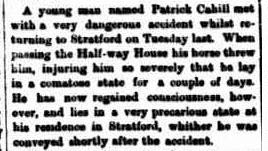 This story of Edmund’s brother, Patrick’s, accident offers clues to why Patrick may have died young in July 1872, aged 38 years. Although it is not conclusive that this is the same chap it seems highly likely pending confirmation.

After Patrick’s death, his brother took on his bootmaker’s business. I found it interesting that both men had followed their trade for quite some time, with success, after arriving in Australia. In the probate notices of the Gippsland Times 8 October 1872, there is “A rule to administer the real estate (£300) of Patrick Cahill, late of Stratford, bootmaker; deceased was granted to his only brother, Edmund Cahill of Stratford; farmer.” 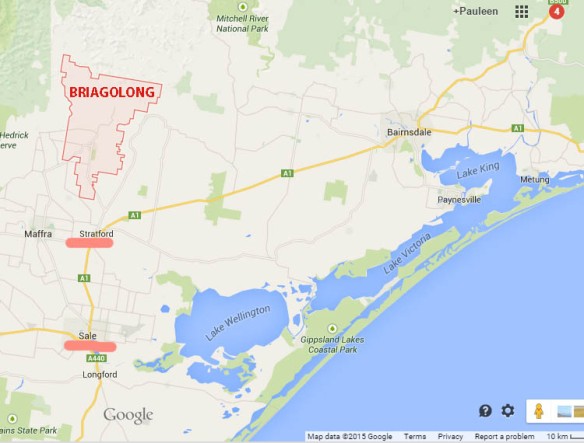 Map of the Gippsland area of eastern Victoria, showing Briagolong, Stratford and Sale.

Edmund Cahill died on 24 June 1921 and was buried in Briagolong Cemetery  his gravestone can be seen on the Billion Graves website here.The newspaper obituaries serve as a testament to Edmund’s life as an early pioneer in Gippsland.

Edmund Cahill had plainly played a significant role in the establishment of the Catholic church in Stratford, Gippsland, donating land for its establishment…it could probably be claimed he was “a pillar of the church”.

Another obituary also ties his arrival in Australia with the immigration records which have been found (see previous post). It is also Edmund’s death registration in the Victorian indexes which gives his parents’ names as John Cahill and Julia Riordan (various spellings)

Although somewhat convoluted I found this family’s story to be an interesting migration story, quite typical of much of the East Clare migration I’ve researched: