In my previous post I was documenting the deaths of Patrick Bourke of O’Brien’s Bridge, and his wife Catherine Bourke nee Hogan from Broadford. It’s been so long since I’ve posted on this site it took me a while to twig that I’d already posted about Margaret Moloney from Killokennedy, and mentioned I’d be looking for her sister Catherine Bourke. As there’s additional information available from different Trove articles I thought it best to add a supplementary post. 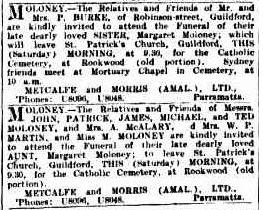 Referring to my East Clare database and baptisms from the parishes of Kilseily and Killokennedy, I believe that Catherine and Margaret were both children of John Hogan and his wife Mary Smith from Killokennedy. Post-Famine, the priests started adding the townland information to the registers which certainly makes a difference when you’re trying to differentiate one Hogan from another.

Margaret Moloney nee Hogan would have been born circa 1843, right before the registers commence so it’s unsurprising her name is not there. However I did find several other children: Michael baptised 1852, Anne in 1854, James in 1857 and Catherine in 1855. I wonder if the latter is the one I’m looking for. Catherine Bourke’s age at death in 1931 was stated as 65, making her estimated year of birth 1866 or 1865. Did they just make a mistake with Catherine’s age, or did the child born in 1855 die and her name given to the younger child? I haven’t recorded the baptisms beyond 1858 so either is possible.

However, we do know from the immigration records that when Margaret arrived on the Montmorency in 1864, her sisters Honora and Bridget were already in Sydney. It is from Margaret’s obituary that we are able to narrow down her sister Catherine’s arrival. Catherine Hogan emigrated on the Peterborough ex Plymouth, arriving in Sydney on 15 January 1878 (NSW Reels 2140-1, [4/4802] p.1). She is a farm servant from Clare, aged 19. It is through the Immigration Deposit Journals that we can accurately pin her down. Her deposit of £2 was paid by Ann Hogan (sister/cousin?) as was the same amount for Mary Moloney. Both are shown as coming from Killokennedy and their referee was the ubiquitous Rev John Bourke PP (no relation to Catherine’s husband, as far as I know).

Catherine’s relationship to Margaret is clear from the obituary and also the funeral notice, but the Moloney, McAlary and Martin nieces and nephews would take rather more unravelling. It is still unclear whether Margaret and Catherine’s other sisters were still alive as suggested in the original post’s obituary. If not, why are none specifically mentioned in the funeral notices? Perhaps I’ll find them as I continue my searches for East Clare Emigrants. 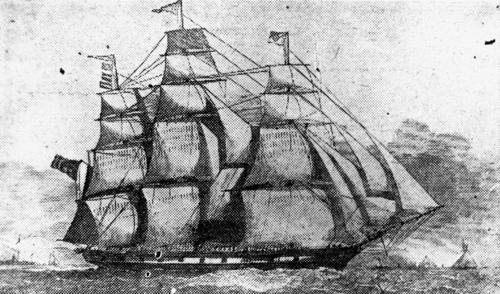